Pilgrimage in a time of Pestilence 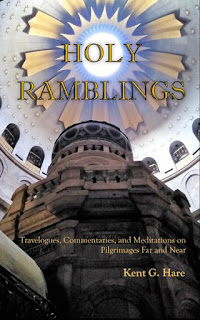 Presenting a chapter from my new book about pilgrimage – HOLY RAMBLINGS: Travelogues, Commentaries, and Meditations on Pilgrimages Far and Near. Available in ebook and print formats: www.holyramblings.com
Well, a week or so ago, just when this period of enforced solitude was beginning, I was talking with the office manager of my parish, the Minor Basilica of the Immaculate Conception, Natchitoches, Louisiana, and I asked her, “Does my timing suck, or what?” After months of work, much longer than I anticipated when I started this project back in the summer, I finally had received a box full of paperbacks, was ready to seek permission from the rector of the basilica to place a few in the gift shop, and announce their availability there as well as from the online merchants that can be accessed through the link above. Then this happened, the new world of social distancing went into effect, public Masses were suspended indefinitely in the Diocese of Alexandria, and the gift shop closed. I ultimately decided on the smaller-scale online roll-out that I started Wednesday evening via Facebook, of which this is a continuation – with a bonus.
Besides meditation on what exactly pilgrimage is and why it seems to be an almost exclusively Catholic thing among modern Christians, followed by detailed day-by-day narratives of my three “big” pilgrimages over the past few years – to Rome and Italy, to the Shrine of Our Lady of Guadalupe in Mexico City, and to the Holy Land – I also spend a couple of chapters surveying the wider world of pilgrimage, discussing the most popular destinations around the world as well as these United States. With the world currently on shutdown, however, the pilgrimage industry as well as basically any other nonessential travel at virtually any level has screeched to a halt. Quarantine, “stay-at-home,” call it what you will, suddenly we are all largely confined to our abodes with a great deal of time on our hands even if we are part of this grand new experiment in work-from-home, “telecommuting,” again call it what you will. What better way to spend some of that time than going on a pilgrimage?
After those surveys of “pilgrimages far” (around the world) and “near” (around the United States), I tackle the subject of “pilgrimages here,” at home – literally – by various means including the new possibilities afforded by modern technology. Here follows that chapter, with commentary after….


[1] Of mysterious origin, with no modern consensus exactly what it comprised, this is most commonly supposed to have been a church going back to a Judaeo-Christian synagogue-church of the late 1st-c., known as the “Church of the Apostles,” later rebuilt as a Byzantine basilica under the name Hagia Sion (“Holy Zion”) and called the “Mother of All Churches.” It is said to have “covered the entire area now occupied by the Church of the Dormition, the Cenacle and the Tomb of David” – See The Holy Land s.v. “Mount Zion” [https://www.seetheholyland.net/mount-zion/], accessed 26 November 2019. See also Wikipedia, s.v. “Church of Zion, Jerusalem,” accessed same date.
[2] Dale Ahlquist, “Chesterton University: Lecture 35: The New Jerusalem,” The Society of Gilbert Keith Chesterton [https://www.chesterton.org/lecture-35/], accessed 14 September 2019)
[3] https://www.goodreads.com/list/show/35717.Camino_de_Santiago . Accessed 14 September 2019.
[4] Kathryne Beebe, Pilgrim & Preacher: The Audiences and Observant Spirituality of Friar Felix Fabri (1437/8-1502) (New York: Oxford University Press, 2014), pp. 3-4.
[5] Michael Xiarhos, “Authenticity and the Cyber Pilgrim,” Journal of Religion & Society 18 (2016): 1-11; quotation from p. 4.
[6] LiveMass.net.
[7] Among that scholarship is the aforementioned Michael Xiarhos, “Authenticity and the Cyber Pilgrim,” Journal of Religion & Society 7 (2016): 1-18; also, Mark W. MacWilliams, “Virtual Pilgrimages on the Internet,” Religion 32.4 (October 2002): 315-335.
[8] Maureen Pratt, “Can’t travel to explore your faith? Try a virtual pilgrimage,” Catholic News Service (15 September 2015), posted at Catholic Philly.com under “Commentaries” [http://catholicphilly.com/2015/09/commentaries/cant-travel-to-explore-your-faith-try-a-virtual-pilgrimage/].
[9] Amy Thomas, Catholic Pilgriim: Living Out Your Catholic Faith [https://catholicpilgrim.net/]
[10] https://thecatholictraveler.com/
[11] The Absent-Minded Professor’s Travels [https://www.theprofstravels.blogspot.com].
[12] Google Search snippet, accessed 16 September 2019.
[13] Xiarhos, “Authenticity,” p. 10.
[14] Alexandria Stanley, “Pope Makes Virtual Visit to Iraqi Site He Must Skip,” New York Times (24 February 2000) [http://www.nytimes.com/2000/02/24/world/pope-makes-virtual-visit-to-iraqi-site-he-must-skip.html]. – Citation defined on Xiarhos, “Authenticity,” p. 11.
[15] Victor Turner and Edith Turner, Image and Pilgrimage in Christian Culture (New York: Columbia University Press, 1978). Kindle edition. Citation defined at Xiarhos, p. 11. Xiarhos had opened his article with a brief discussion of Turner and Turner’s conception of pilgrimage as a physical act (pp. 1-2).
[16] Xiarhos, “Authenticity,” pp. 6-7.
[17] Benedict XVI, Sacramentum Caritatis (The Sacrament of Charity, Apostolic Exhortation on the Eucharist as the Source and Summit of the Church’s Life and Mission) (22 February 2007), 57 [http://w2.vatican.va/content/benedict-xvi/en/apost_exhortations/documents/hf_ben-xvi_exh_20070222_sacramentum-caritatis.html] Accessed 20 September 2019.
[18] Catechism of the Catholic Church § 1471.
[19] Blessed Anne Catherine Emmerich, The Life of the Blessed Virgin Mary, trans. Sir Michael Pelairet (London: Catholic Way Publishing, 2013), 18: 3, Kindle edition at 75%.
[20] The Enchiridion of Indulgences: Norms and Practices. Authorized English Edition. Issued by the Sacred Apostolic Penitentiary, 1968. Formatted into electronic text 02 June 1998 [https://www.freecatholicebooks.com/books/indulgences.pdf], accessed 20 September 2019.
[21] The Highest Heaven. Originating in ancient cosmology for the place of the pure and eternal fire or aether in Aristotle’s natural philosophy, medieval Christian philosophers used the term of the dwelling place of God and the highest of the angels. See Wikipedia s.v. “Empyrean.” It is the Presence of God, the place of the Beatific Vision which is the goal of every believer, the ultimate destination of every Christian pilgrim.
[22] Enchiridion of Indulgences, n. 48.