This is a record of my first trip out of the United States, during Spring Break/Holy Week of my senior year in high school.  Along with many other influences, this trip is what inspired my interest in the Middle Ages and ultimately led me to become an historian.  We were a small group from the French class at Ouachita Parish High School, Monroe, Louisiana, seven girls (I think), two boys, and the teacher as sole chaperone. I doubt that would be allowed these days.  The narrative is based on notes and my personal trip journal that I kept at the time and included in the photo album that I still treasure. 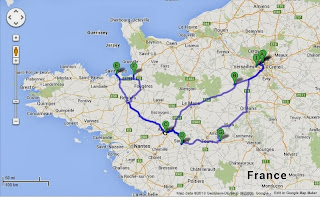 Between the next two pictures from Friday, most of our group are shown.
Apologies for the poor quality; These were taken with my
110 Kodak Instamatic camera and scanned from thirty-year-old prints.
Doug was the one with the sophisticated 35mm SLR camera.

Most other pictures are not mine,
but are taken from the Internet.

Departed Monroe Airport to Atlanta where we changed planes for the flight to New York City. There we boarded an Air France 747 and flew to Paris, leaving New York about 10 pm.


Overcast, then moderately sunny. Arrived Charles de Gaulle Airport about 10 am local time. We boarded our tour bus, meeting for the first time Catherine, our guide, and Jean-Pierre, our driver.  Since one of the groups which was to travel with us was going to be late, we all went on a short excursion to St.-Denis Basilique [Basilica; St.-Denis was the burial place for the kings of France] [link]. We also strolled through a street market near St.-Denis. We then returned to Charles de Gaulle and picked up the stragglers and then headed for Angers, which was to be our first base. Soon after leaving Paris, we stopped and ate at a “truck-stop”-like place. Then we went to the Chartres Cathedral [link]. We then continued on to Angers, traveling through Le Mans, and arrived at our hotel. We ate and finally got to sleep after more than thirty sleepless hours.

Overcast and rainy-misty all day. We ate breakfast and then Catherine took us on a walking excursion through Angers to the Chateau of Angers [link]. We toured it, and then we all split up, but had to be back at the hotel by 1 pm. I went with Mr. [V.P.] Dalrymple [our high school French teacher, who had, incidentally, gone to school in Angers], Brenda [Thompson], and Marie [Easterling] to see the Cathedral of Angers [link], and then we walked back through the city to our hotel, through a shopping district. In the afternoon, we went on the bus to Saumur and through the French Cavalry School there. Then we toured a wine cave and (hee-hee-hee [notation from my original journal, I'm embarrassed to admit]) got free samples. Then we returned to the hotel.

Overcast, then clearing. Karen Merritt was sick in the morning, and eventually several people got nauseous; I did not. We rode for a long time to St.-Malo [link], a walled town [on the channel coast of Britanny], and then on to Mont St.-Michel [a tidal island off the western coast of Normandy] [link]. There I ate lunch with Carolyn [Lockhart], Brenda, and Renée [Ripley]. I had mutton along with Carolyn, and Brenda and Renée had pork. Then we went on the tour through the monastery atop Mont St.-Michel, except for Mr. Dalrymple, who shopped instead. We then rode back to Angers. Doug [McDonald] and I went over to the train station across the street from our hotel and somehow managed to buy stamps.


Overcast and cold.  We packed up and pulled out of Angers and headed back toward Paris. On the way we stopped at several points of interest. The first was the Chateau Azey-le-Rideau [link]. Then we went to Chenonceau [link], where we ate. By this time, Doug had developed a really bad cold. We went on to Chambord [link], and then continued on to Paris, passing through Orléans along the way. Immediately upon arriving at our hotel, the Hotel Prima [see note below] [link], near Montmartre, Doug hit the sack, popping my sudafeds.  That night, after dinner, all of us but Doug went out to L’Arc de Triomphe [link].

Sunny. We went out and toured Versailles [link]. Returning to the city, we exchanged money and then went through the Louvre in the early afternoon. Afterward, Carolyn, Renée, and I went shopping. If it hadn’t been for them, I would have been lost shopping-wise. We went through the Galleries-Lafayette [link] and another place that stuck in my mind, a tobacco shop where I bought a few decks of cards, and then we returned to the hotel. Meanwhile, Brenda had managed to get herself lost in Paris, but eventually managed to find her way back to the hotel. That night we all went out and saw the fountains and the Eiffel Tower at night [link].

Sunny. We went up to Montmartre [link[ and then down to the Place de Concorde [link]. Afterward, Mr. D., Toni [Durham], and I went to Notre Dame Cathedral and then walked back through Paris. We saw the riverfront booksellers, the Baubourg [the most unsightly p.o.s. building I've ever seen! [link]), and an American country-western singer and his dancing marionette. That night Doug and I made koolaid that I had brought [chilling it with ice in the bidée (!)], and after we had all gotten together and played cards for a few hours, he, Carolyn, Renée, Brenda, and I had a party drinking koolaid.  [This was only a few months before the Jonestown Massacre [link] would give that phrase a whole new meaning.]

Sunny and hot. We went out to the Ste-Chapelle [link] and then to Notre Dame [link], and in the afternoon on a boat trip down the River Seine. That night, Doug, Renée, Carolyn, and I went and ate hamburgers at Wimpy’s, at Doug’s insistence. The burgers were hideous, but Doug would not admit it.

Cloudy both in Paris and New York. We flew to New York, leaving Paris about 1 pm local time and arriving in New York at Kennedy International at about the same local time. I sat between Brenda and Rachel. That night I called home. We went to eat in a restaurant and then to the Radio City Music Hall where we saw the Rockettes. In the restaurant, the waiter didn’t know what I meant when I said “Cokola,” and Mr. D. had to translate, “Coca Cola.” We might as well have been back in France. When we finally got to bed in our hotel, we’d been up for over a day.

Cloudy and cold. We went on a bus tour of New York, all but Doug and Carolyn. We saw a Buddhist temple in Chinatown and the Empire State Building and the Statue of Liberty from afar. We then flew home, with a single stop in Atlanta, Georgia.

Note:  Amazingly enough, an Internet search for "Hotel Prima Paris" in 2013 finds it, albeit doing business under a different name today, "Hotel 29 Lepic" (the street address).  I am as certain as can be close to 35 years later that the building shown is our hotel.