Texas 2019 - Searching for a Daily Mass in the Hill Country….

About half of our group are daily Communicants at the Basilica of the Immaculate Conception in Natchitoches. This tour of the Painted Churches is, for us, a pilgrimage – a religious devotion. We want to attend daily Mass while there in Schulenburg. Here, besides missing his company and insights, is where we will miss Fr. Louis while we’re there – the original intention had been for him to say a “private” Mass for us in one of the Painted Churches. Sadly, that isn’t working out. We will have to find a scheduled Mass … which is proving harder than expected.

We really are blessed here in Natchitoches to have two regular Masses each day of the week, Monday through Friday – 06:30 at the Basilica and 12:05 only a few blocks away at St. Anthony of Padua Church. There is, furthermore, Mass at 17:30 Tuesday-Thursday (as well as 08:00 Friday) at Holy Cross, the Campus Ministry Church at my University, only a few blocks from the Basilica in a different direction. (Natchitoches is small.)

Confining it to within 20 mi of Schulenburg, based on the website Masstimes.org using as my search argument “Schulenburg, Texas,” I found really only one convenient, at 06:30 Tuesday morning. Fortunately, that’s the time of our morning Mass at the Basilica, so it won’t be too much of a shock to our systems. Unfortunately, it’s not repeated on Wednesday morning. Extending the time to the Monday and Tuesday evenings garners a couple of other options as well. I include telephone information for all of these because using any such Internet index based on reported data that could change at any time always demands to be confirmed.

Mini-Pilgrimage: The Painted Churches of Texas

This has actually been in the making for a couple of years. In conversation with my good friends Sonny and Sue, and their son Fr. Louis, mention was made of the Painted Churches of Texas. I had never heard of them. Sonny is of Czech ancestry, born and raised in Sealy, Texas. They told me how across the Texas hill country there are a number of historic churches (citations vary from “twenty” to “a couple of dozen”), built largely by 19th-c. Central European immigrants in the architectural and decorative style of their homelands, mainly Bohemia and Germany. To quote an article at the Texas Hill Country website:

The insides of these magnificent churches are layered with hours of painstaking labor by hand stenciling, infill, freehand, marbling, staining and graining. They are adorned with masterful paintings, shimmering stained glass, charming murals, and gold-encrusted altars. [LINK].

Fr. Louis suggested that we – himself, his parents, my wife and myself, and various other church friends – should make a pilgrimage.

Here are two episodes of Sacred Treasures with Kathie Duggan on Radio Maria [archive page LINK] discussing the August 2018 Pilgrimage to the Holy Land. The first features myself; the second features our Israeli Christian tour guide Tony Azraq ... and myself (I'll explain below):

Here's the backstory, including why these are being posted so long after the fact....

A few weeks after we returned from the Holy Land in late August, Kathie invited me to join her on her weekly radio show to talk about the pilgrimage. Since it turned out the date she proposed, Monday 01 October, was the first day of my university's two-day fall break, I was able to drive down to Alexandria and join her in the studio rather than Skyping or just calling in on my cell phone. So I got to have lunch and visit with her and the staff at Radio Maria, including Fr. Emilio who was in the station for the periodic "Mariathon" fund raising campaign. It was an all around good afternoon.

I always intended to post a link to the audio ... but weeks passed and it never appeared. I contacted the station and found out they had suffered a major data breach or virus (I don't remember which at this point) that had corrupted a lot of their files and their station engineer was working through reconstructing what he could salvage. Over time, my check-ins became less and less frequent, although I think I did check within the past few weeks.

In the meantime, in mid November Kathie put out the word that she had arranged for our tour guide Tony to appear, and invited pilgrims to call in during that show. I jumped at the chance and did so ... and inadvertently ended up basically being her guest for the back half of the show when Tony's Skype connection from Israel apparently failed. It was problematic during the time he was with us, then went out completely. And that's the story of the Monday 19 November episode, which provided another good chance to reminisce about the pilgrimage.

Anyway, why now? A few days ago my wife saw in the Radio Maria newsletter that Fr. Emilio is stepping down as Priest Director [LINK -- page 2]. I decided to go in and see if there was an announcement on their web page and, on a whim, checked into the archives for the long-missing episodes -- and voila, there they were. So here they are.

Regarding the departure of Fr. Emilio, I take this opportunity to wish him farewell, although it makes the chance our paths will ever cross again vanishingly small, I know. I always hoped maybe on one of his trips to the station in Alexandria we could somehow get together a reunion meal of as many pilgrims as are in driving distance, and once again reminisce about some good times. He will be missed by Radio Maria, I know, and he will be missed by me. Vaya con Dios, Padre!

Guest Pilgrimage: Fr. Ryan Humphries’ Sabbatical 2018: The Camino and Other Sites in Europe 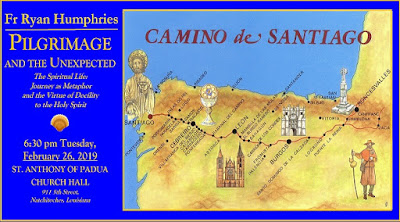 From 2007 to 2010, recently-ordained Fr. Ryan Humphries was the Parochial Vicar (assistant pastor) for my parish, the then Church of the Immaculate Conception in Natchitoches, Louisiana. In 2013 he returned for what became a three-year stint as Rector of what by then was the Minor Basilica of the Immaculate Conception. I consider him my main spiritual adviser and a good friend.

As Father explains at the beginning of this talk, in early 2018 he approached our recently installed Bishop for a two-week extension to his four weeks of vacation to allow him to make a pilgrimage along the Camino de Santiago and unexpectedly came away from that meeting with a four-month sabbatical (August-November) and quite expanded agenda of pilgrimages all over Europe. That was just the first of a series of unexpected developments from which he took a profound spiritual message.

On Sunday 24 February 2019, I received a text message from him letting me know that he would be in Natchitoches on Tuesday evening 26 February, giving a talk on his pilgrimage with pictures and lots of anecdotes, and asking me to “get the word out.” By the end of the exchange that ensued, I had created a title, a banner, and a Facebook Event for the talk – and had arranged to meet Fr. Ryan for beer at the local pub beforehand.

The Facebook Event got some traction, being shared well outside my own circle, including to someone lamenting that she could not drive up to Natchitoches from New Orleans for the talk and hoping that someone would record it. So I asked Father if it would be okay to do so,  suggesting that he just refer anyone wanting it to contact me but that I would not post it or anything. He responded to go ahead and post it, and offered his slideshow as well. And so was born the first-ever “guest post” to this little travel blog.

I am definitely an amateur at wedding audio to video, and although I am overall satisfied with the result I nonetheless apologize for what is objectively a rather crude job of editing. I thought I had the timings down, but when it compiled some parts had drifted a few seconds out of sync. (My apologies as well for my phone alarm going off near the end of Fr. Ryan’s talk! I was using the phone to capture the audio, so that comes through loud and clear. I didn’t expect the talk to go over an hour in length and forgot about that particular alarm setting.)

Kevin Shanahan of the Natchitoches Parish Journal attended the latter part of the talk, took pictures, and posted an article about Fr. Ryan’s adventures a couple of days later, which may be read here [LINK].

Here are a few more links to a few (by no means all) interesting items:

The Louisiana Window in Westminster Abbey: [LINK] [LINK]
Posted by Kent G. Hare at 22:55 No comments: