Well, I kind of went map-happy this morning, and came up with four (!) more to illustrate the pilgrimage last month.  Here they are:

For general orientation, this puts north-central Italy into its overall context, with our final driving routes indicated.
Read more »
Posted by Kent G. Hare at 11:11 No comments:

Here is a map I just made to illustrate where the various places we saw in Rome are located.  "Pilgrimage sites" does not, of course, mean that they are all religious in nature.  They are just the various major locations that we went in Rome while on the Pilgrimage.  At some time in the near future I will go back and link and key those last three days (Sunday through Tuesday) so readers can easily jump to the map if they want. 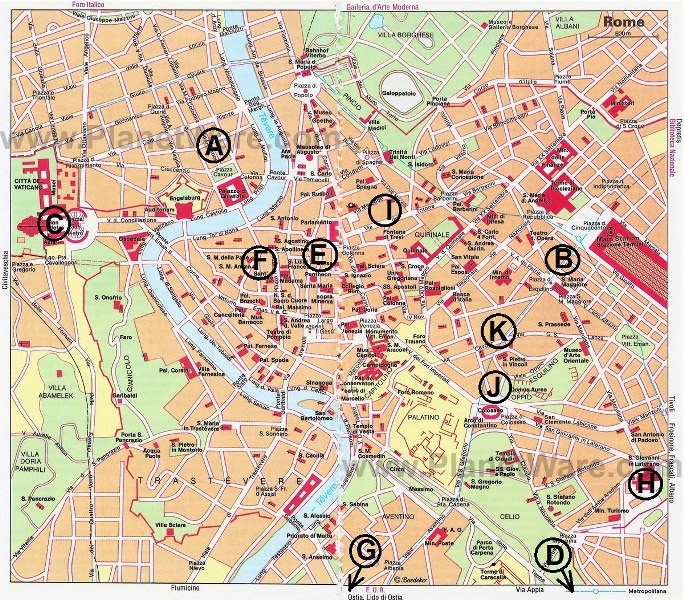 This day full of good-byes began earlier than ever:  Wake-up at 04:30.  We’d had to have our large bags outside the rooms the evening before by 23:00, and assembled to leave the Hotel Cicerone at 05:30, with brown bag breakfasts.  Luigi drove us down to the Da Vinci Airport, and for all that it was a long, long day, there’s not much to say about it.  The flights went off without a hitch, from Rome to Atlanta (along the way I caught my only-ever glimpses of the Mediterranean Sea and the snow-covered Alps), thence to Dallas, with various groups and individuals peeling off toward their own destinations (such as the group from south Louisiana and the pair from Little Rock) along the way, and then the final long bus-ride home, arriving back in Natchitoches at about 01:30 on what was properly Thursday 30 October.  At which time it was about 07:30 Thursday morning in Rome, and we’d been traveling approximately 26 hours!

The MBIC Pilgrimage to Italy 2014 came to an end.  Deo Gratias.

Our last full day in Rome – and it was full – began with a relatively late wake-up at 07:00, 08:00 breakfast, to be met by Roberta in the lobby, thence immediately onto the bus for the drive to St. John Lateran, the last of the four Major Basilicas of Rome we would visit on our pilgrimage [LINK].  It is the oldest of the Basilicas, the first in rank (thus formally called the “Archbasilica of St. John Lateran”), indeed, the oldest surviving church in the West.  It, moreover – not St. Peter’s – serves as the Pope’s cathedral in his capacity as Bishop of Rome.

The Basilica as a church building goes back to the very time of the first Christian Roman Emperor Constantine the Great in the early 4th century, when it was given by him to the Pope – but it is in fact much more ancient than that, being part of the complex making up the extensive Palace of the Lateran branch of the Sextian family, one of the more ancient families in Rome.  (Among the early notables was Lucius Sextius Lateranus of Licinian-Sextian Law fame and first plebeian Consul in the 4th century BC).  Constantine had inherited the Lateran Palace by marriage, but from the early 4th century AD it would serve as the usual Papal residence through most of the Middle Ages, undergoing the usual periodic restorations after fires or earthquakes, such as in the 10th century, before being magnificently embellished by Pope Innocent III in the early 13th century.  There, of course, in 1215, Innocent would preside over one of the four most important Ecumenical Councils in the history of the Church, Lateran IV.  Then an extended period of vacancy in the 14th century during the Avignon Papacy (1305-1378) would leave it in near ruins to be rebuilt yet again.  The Basilica also suffered during that period, to be rebuilt and embellished over the course of centuries once the Popes had returned to Rome.  The modern façade was designed by Allessandro Galilei (related to Galileo, but a century later), “remov[ing] all vestiges of the ancient basilica architecture, and impart[ing] a new-classical façade” [op. cit.].  Nevertheless, some elements of the most ancient structures were preserved throughout, including the Scala Sancta … but we’ll get to that.
Read more »
Posted by Kent G. Hare at 21:06 No comments:

The wake-up call came early today – 05:30, for 06:30 breakfast and 07:15 bus departure for the Vatican City, the temporal center of the Holy Roman Catholic Church.  The Vatican is kind of like Florence – where to start?  Well, here’s the gist:  Vatican City is a walled, independent city-state completely surrounded by the city of Rome.  It comprises an area of about 110 acres, with a population under a thousand, ruled by the Pope.  It’s located on the right side of the Tiber River, across the river from the Seven Hills of Ancient Rome, on the Vatican Hill and surrounding once-marshy fields abutting the Janiculum Hill.  This walled area is all that’s left of over a thousand years when the Popes were temporal as well as spiritual leaders in central Italy, much of which comprised the Papal States.  In 1861, all of Italy save Rome was united by the King of Sardinia into the modern Kingdom of Italy; the Popes lost all except the city itself.  Then, as a result of the Franco-Prussian War in 1870, France withdrew its troops which had been protecting Rome’s independence, and the Popes lost Rome.  They withdrew within the walls of the Vatican, not to emerge for almost sixty years, until the 1929 Lateran Treaty between Pope Pius XI and Benito Mussolini secured the status of the Vatican as an independent state.  St. Peter’s Basilica, the most important of the four Major Basilicas of Rome, fronted by the great Square with the sweeping colonnades, is only a small part of the complex, which contains much more – residences for the functionaries of the Holy See, offices, chapels, museums, libraries, gardens – only a fraction of which were we able to see in our day there.

Oh blessed day!  A week earlier than in the US, Italian clocks “fell back” overnight.  So we got an extra hour of sleep! – And get to do it again back home next weekend!  I generally disapprove of "Daylight Savings Time" which puts our clocks an hour out of sync with the sun for about two-thirds of the year, but man! I do like "Fall Back Weekend"!

And the wake-up call came a little later by the clock, as well – 06:15 for a 07:15-ish breakfast.  Although the spread was every bit as good as we’d had before (and the bacon was, well, infinitely better), I can’t say I liked the regimented way Hotel Cicerone did things – they had to confirm your room number and directed you toward specific tables, not always seeming to follow any pattern.  I guess it’s related to something said by one of the padres a few days before – the main rule in Italy is that the rules don’t seem to make any sense, and they change for no apparent reason on a daily basis.  Anyway, we started assembling about 08:00 for the bus to depart at 08:15 for Sunday Mass.