Today was the journey home, and although I hoped to squeeze in one more Painted Church, it was not to be.

We got Blue Bell ice cream, though!

Briefly, I slept in again until almost 08:00, then Anne and I went down to the lobby for breakfast. It was full -- a condition worsened by the hotel booking an 08:00 private meeting in a closed-off part of the dining area during the posted breakfast hours. Not cool! The worker minding the breakfast bar was very apologetic, and oversaw pulling together some of the lounge furniture as a makeshift expansion to the dining area that some of us used.

Some of our party had left already; others passed through on their way out as we ate; some visited with us. In all, I think we were probably all out of the hotel by 09:30 or so, going our separate ways.


Anne and I made a last visit to the Kountry Kitchen Bakery, picking up some pastries to go -- leaving Schulenburg pretty much as we came into it! -- then were on the road almost exactly at 10:00. Anne needed to be back in Natchitoches to teach religion to the second graders at 18:00, so we had a little flexibility to our travels, but not a whole lot. Nevertheless, we opted to head directly north out of Schulenburg. I had gotten a little confused by the two different lists of churches I was dealing with in my research -- one of Painted Churches and one of churches I was finding Masses at -- and was thinking there was a Painted Church in LaGrange, about a half-hour or so north of Schulenburg. It was cloudy but not so cool, and the sun came out in the afternoon, I think about the time we hit Lufkin.

We easily found Sacred Heart Catholic Church there in LaGrange-- and it obviously was not historic, being rather a modern structure, with some kind of construction going on to boot. Only then did I consult the comprehensive list of Painted Churches the guides had shared with me yesterday and find out for sure there is no Painted Church in LaGrange. So we continued on.

There were a few navigation errors along the way, but it was a very scenic trip. Even without a couple of stops, this route would have taken a few minutes longer than the suggested route basically via Houston, but it was much more rewarding. We passed through a number of small Texas towns and saw a good deal of the various Texas wildflowers, Anne was absolutely gobsmacked when we came to Round Top right in the middle of a HUGE flea market that literally stretched from one end of town to the other. Apparently it's an annual thing* -- and I put two and two together and suspect that's the real reason all the hotels in Schulenburg were sold out, because there is no way that little town (Pop. 90, according to the sign -- but someone had scrawled two more zeroes to the end...) could accommodate as many people as we saw. She is already plotting a "sissy-trip" for herself and her sisters to gather there next year.... We also made our way to the Blue Bell Creamery in Brenham, and although we did not have time to go through the tour, we did have time to stop for ice cream in the little shop.

And then it was drive, drive, drive, with only a couple of pit stops, arriving back home about 17:00. By then we'd been hearing from others in our group that they were either at their destinations or home.

And so ended a very short, but very worthwhile, pilgrimage to the Painted Churches of Texas. We have good friends. I'm already plotting a second such "micro-pilgrimage" ... the Mission Churches of San Antonio...? ... EWTN? 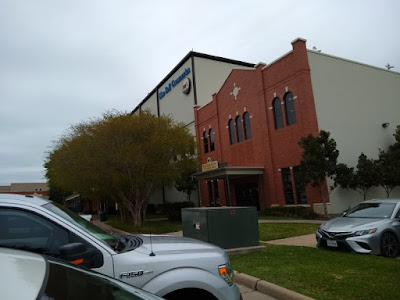 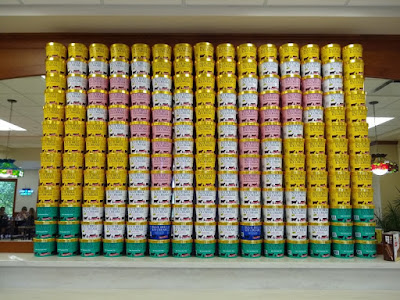